Analogies are like social media networks. We all implicitly recognize their utility by using them, but we complain incessantly about their imperfections.

There are no perfect analogies. This is definitional. If an analogy was perfect, it would actually be a tautology, e.g., water is like melted ice.

I’m five sentences in, and I’ve already acknowledged that analogies are flawed and hated, so why am I hooked on analogies like a fish that just swam too close to some particularly smelly bait?

I’m hooked on analogies because learning without analogies is like traveling across the country without a vehicle — you might get there eventually, but there is certainly an easier way.

Imagine, if you will, two people trying to become bakers: Redundant Ron and Analogous Ann.

Redundant Ron learns each new recipe from scratch. He learns to bake cakes, cupcakes, cookies, strudels, cinnamon rolls, and other baked goods one by one, never relying on his prior knowledge to help him.

Analogous Ann, on the other hand, compiles a library of baking techniques as she goes. As she learns how to make cupcakes, she recognizes that they are simply smaller cakes. Once she knows how to bake a pie, tarts are easy because they are like pies without a cover.

We are all like Analogous Ann. We don’t generally learn from scratch. When we learn subtraction, we are taught that it is simply reverse addition. Otherwise, we’d have to learn the principles that we learned for addition all over again.

Analogies serve as drag-and-drop learning. It’s hard to train new pathways in the brain. If you can instead drop in a previous bit of knowledge that is 90% similar to the new skill, you will save time in your learning process.

Even better, any time you improve one or the other of the analogous skills, you are actually improving both. 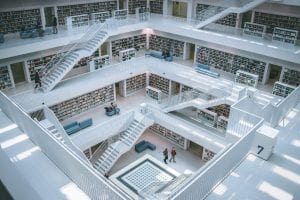 A commenter in one of my recent articles pointed out a concern that polymaths are missing out on an important aspect of learning: compounding knowledge. That gave me pause — could they be right?

Imagine that all of the possible knowledge is contained within a gigantic library. This library stretches so high and so wide that you could travel infinitely in any direction and never reach the walls or ceiling. But there’s a problem — the better books are all on higher shelves, and nobody bothered to build a way to reach them.

Compounding knowledge within a specialization is like building a staircase to these higher shelves. Each new aspect of the specialization that we master builds on the old, adding one more step to the staircase. Analogies are one of the most powerful materials used in building these steps.

For a hyper-specialized individual, this staircase can become quite tall, possibly taller than any of the other staircases anyone has built in that section of the library. But what if you need to reach a different section? It would seem that your only option is to climb down and build a new staircase elsewhere.

Each time a jack-of-all-trades needs to add a staircase in a new section, they have to start a new staircase from scratch. They have compounded knowledge within each field, but it does them little if any good in other fields.

Polymaths also have staircases in each of several sections. What’s different is that they have learned to build bridges between the sections, compounding knowledge across fields instead of within a field. This is what lets polymaths become experts without specializing.

These bridges, as it so happens, are easier to build than staircases — as long as you know how they are made.

These bridges not only allow you to use your staircase in one section to speed your progress into another section, but they also let you take knowledge from both of those sections and combine them into something truly original — something that could never exist with knowledge from just one of the sections.

Francis Crick’s path to the Nobel prize required him to build just such a bridge from physics to biology. He didn’t know as much biology as the biologists because he didn’t have as many stairs in that staircase, but his bridge allowed him to bypass that limitation and access combined areas of physics and biology that were critical to his discovery of the structure of DNA.

Could you go through life without analogies? Probably not. Even if you could, it would leave you at a constant disadvantage when it comes to learning.

Even a bad analogy, if used correctly, is better than starting from scratch. An analogy that is 40% inaccurate still starts you 60% closer to mastering the new task.

Learn to use analogies more powerfully. Stretch them to their limits. Finding analogies between similar tasks or topics will make you a faster learner within any field.

Better yet, finding analogies between seemingly unrelated topics will make you a faster learner across and between fields — a modern-day polymath.